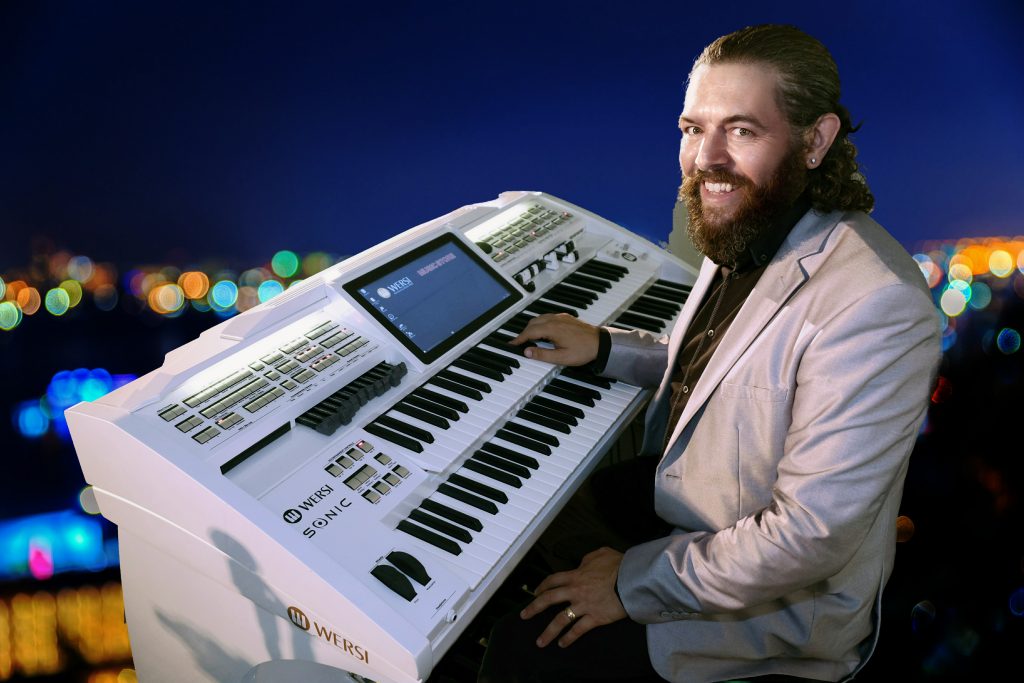 The long hot dry summer of 2018 continued, Brett Wales our musician for the evening was greeted on stage by an audience of 36 Members and 15 guests. Brett who travelled down from Nottingham introduced himself and with a laugh and a joke set about producing an evening of music worthy of a much larger audience. The performance was full, lively and encompassed many styles. Performers like to turn themselves out attired to impress. Brett played the first half of the concert wearing a dark shirt light jacket and with his hair swept and tied back, he immerged after the interval to whistles cheers and other applause. There was Brett in a flamboyant move suit and a crimson tie, quite a surprise.  After the performance ended Brett was of course recalled for an encore itself a medley all received to great applause. Brett’s instrument – a Wersi sonic. Some of the evening’s music -Gladiator, On a street where I live, when your smiling, How can you mend a broken heart (BG’s), Blanket on the ground, Intermezzo (Cavalier Rusticana), Day by Day, A Helios organ tribute, ABBA medley, I left my heart in San Francisco, Pirates of the Caribbean (Zimmer), the lady and the tramp. Interval This old house, River dance Ballet, ToTo Africa, Bohemian rhapsody (Queen), In a Persian Market (Albert Ketelbly), William Tell (Rossini), Fulsome Prison Blues (Johnny Cash), Sound of silence (Simon and Garfunkel), I can’t help falling in love with you, One moment in time (Whitney Houston), Equinox (Jean-Michel-Jarre) He’ll be coming round the mountain,  Encore – A medley!

Brett was born on the 23rd of August 1978 in Nottingham and raised by his grandparents Marianne and Alwyn, (He still lives and works from that same house.)

Alwyn owned an Elka 707 Organ, He returned from work one day to discover his three year old grandson playing the organ. The family felt Brett’s talent should not be wasted and arranged private lessons from a local music teacher.

Bretts talent was recognised as unusual with some considering him a  ‘Boy Genius’. He later met with Wersi Stars, Klaus Wunderlich and Franz Lambert. In 1989 that meeting led to a memorable year for Brett and his family, they made a trip to see Franz live at the Felsenkeller. After hearing of Brett’s achievements, Franz requested that Brett played for him and his audience. One of the pieces Brett chose to play was one that Franz himself plays, “Everybody Loves Somebody Sometimes” Many were amazed at the ability of this nine year old who played seemingly without a care in the world.  It brought the house down.

By the time he was twelve Brett was travelling and demonstrating for Wersi in the U.K . At fifteen Brett was accepted for Clarendon College in Nottingham to study music.

Today Brett is in demand and playing to venues all over the country.