Perhaps it was the recent icy roads and fogy evenings or the particularly chilly night of the 23rd Jan, maybe the road closures after an explosion that evening, which took out the building front of flats in Ardleigh Green Romford. Something brought about an unusually low turnout for the music of Chris Jones.

Standing under a heater in the hall and rubbing his hands together he joked about how cold the hall was, it did though fortunately warm up during the evening.

As we perhaps expected, Chris produced a concert that provided music from many genre’s, from the classics of Gustav Mahler to Boyzone, TV themes including sleepy shores and Poirot. A comprehensive evening’s entertainment which even had his audience singing along with him.

The instrument that Chris brought with him had been adapted and reengineered by Chris to make it slightly more portable, he made a point of telling us that the equipment was 25 years old yet apparently, just as good as new.

Whilst I can appreciate good music my present knowledge of these keyboard instruments is limited and I have had to ask for details. So thanks to Dave for the following.

Chris had a self built 3 manual and pedal organ made from a Yamaha US-1 (dating back to 1990), a Technics KN7000 keyboard and a variety of Yamaha, Korg and Roland sound expanders including the Fantom XR which was used to provide some very good Theatre Organ sounds. 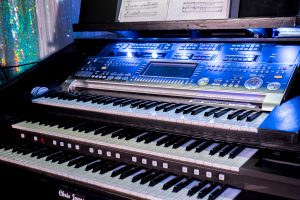